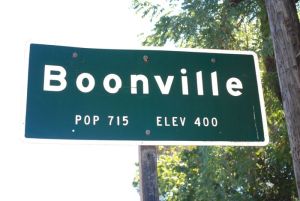 Quirky Boonville is in Mendocino County, 12 ½ miles southwest of Ukiah.  The town has its own language called Boontling, and you’ll see signs posted in both Boontling and in English.

Boonville, all 5.5 square miles of it, was founded by John Burgots in 1862.   (The town was originally called The Corners.)  Burgots built a hotel, and in 1864 Alonzo Kendall built another hotel. Boonville was on its way!  The town became known as Kendall’s City.  W.W. Boone bought a store in town, gave the place its current name, and the first post office opened in 1875.

Boonville is in the Anderson Valley, 115 miles north of San Francisco.  The local Anderson Valley Brewing Company has cool labels with the motto “It’s bahl hornin’,” which means “It’s good drinkin'” in Boontling.  The Anderson Valley not only has good brews, it is the newest up and coming wine country, just north of Napa and Sonoma.

Boonville, despite its small population, has a minor reputation among political leftists in the USA for countercultural ideals, including promotion of organic food. The town serves as the setting for the novel Boonville by Robert Mailer Anderson. Some commentators believe Boonville may be the setting for the novel Vineland by Thomas Pynchon.  The town is well-known to Unificationists as the site of the successful but ill-fated Creative Community Project.

Head up to Anderson Valley and taste the hidden brews and the about-to-famous wineries.  And, stay for the scenery and the friendly, down-home folks.  Relax!